Question from an art student:

Hello Juan. Impressionism is an art style interesting me most of all.No detal just impression.

My question is;If i tred to paint in  split-compementory color system ,tell me please would it be correct to use other colors out of this sistem as  incydential colors?.How do  you do it?


Juan will answer this question tonight or tomorrow.
Posted by Unknown at 3:37 PM 1 comment:

Juan is painting in Mendocino 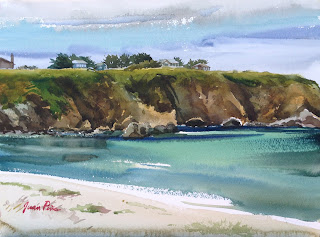 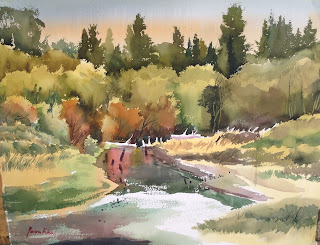 Juan has been painting the last three days in Mendocino.  He is a celebrity artist for the first Mendocino Open Paint Out - MOPO 2013.

Posted by Unknown at 9:46 PM No comments: 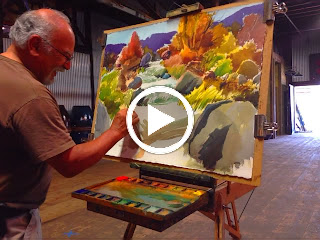 In case you missed seeing Juan paint his watercolor demo at the High Hand Gallery.

Posted by Unknown at 8:08 PM No comments:

Gorgeous country here in the Aspen, Colorado area.  We are hosted in a beautiful home surrounded by beautiful mountains.  What a sunset!  Will be showing some of my watercolors soon. Posted by Unknown at 2:52 PM No comments:

The following article is from Facebook.  Honey & cinnamon advantages may be a little exaggerated, but if some of it is true, let's have cinnamon & honey! 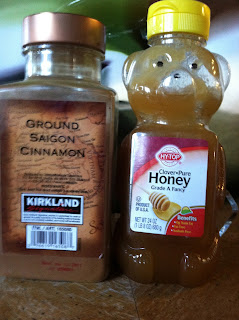 GREAT INFORMATION ABOUT HONEY & CINNAMON
Drug companies won't like this one getting around. Facts on Honey and Cinnamon:
It is found that a mix of honey and cinnamon cures most diseases. Honey is produced in most of the countries of the world. Scientists of today also note honey as very effective medicine for all kinds of diseases. Honey can be used without side effects which is also a plus.Today's science says that even though honey is sweet, when it is taken in the right dosage as a medicine, it does not harm even diabetic patients. Researched by western scientists:

HEART DISEASES: Make a paste of honey and cinnamon powder, put it on toast instead of jelly and jam and eat it regularly for breakfast. It reduces the cholesterol and could potentially save one from heart attack. Also, even if you have already had an attack studies show you could be kept miles away from the next attack. Regular use of cinnamon honey strengthens the heart beat. In America and Canada, various nursing homes have treated patients successfully and have found that as one ages the arteries and veins lose their flexibility and get clogged; honey and cinnamon revitalize the arteries and the veins.

ARTHRITIS: Arthritis patients can benefit by taking one cup of hot water with two tablespoons of honey and one small teaspoon of cinnamon powder. When taken daily even chronic arthritis can be cured. In a recent research conducted at the Copenhagen University, it was found that when the doctors treated their patients with a mixture of one tablespoon Honey and half teaspoon Cinnamon powder before breakfast, they found that within a week (out of the 200 people so treated) practically 73 patients were totally relieved of pain -- and within a month, most all the patients who could not walk or move around because of arthritis now started walking without pain.

BLADDER INFECTIONS: Take two tablespoons of cinnamon powder and one teaspoon of honey in a glass of lukewarm water and drink it. It destroys the germs in the bladder....who knew?

CHOLESTEROL: Two tablespoons of honey and three teaspoons of Cinnamon Powder mixed in 16 ounces of tea water given to a cholesterol patient was found to reduce the level of cholesterol in the blood by 10 percent within two hours. As mentioned for arthritic patients, when taken three times a day, any chronic cholesterol-could be cured. According to information received in the said Journal, pure honey taken with food daily relieves complaints of cholesterol.

COLDS: Those suffering from common or severe colds should take one tablespoon lukewarm honey with 1/4 spoon cinnamon powder daily for three days. This process will cure most chronic cough, cold, and, clear the sinuses, and it's delicious too!

GAS: According to the studies done in India and Japan, it is revealed that when Honey is taken with cinnamon powder the stomach is relieved of gas.

INDIGESTION: Cinnamon powder sprinkled on two tablespoons of honey taken before food is eaten relieves acidity and digests the heaviest of meals

INFLUENZA: A scientist in Spain has proved that honey contains a natural 'Ingredient' which kills the influenza germs and saves the patient from flu.

LONGEVITY: Tea made with honey and cinnamon powder, when taken regularly, arrests the ravages of old age. Use four teaspoons of honey, one teaspoon of cinnamon powder, and three cups of boiling water to make a tea. Drink 1/4 cup, three to four times a day. It keeps the skin fresh and soft and arrests old age. Life spans increase and even a 100 year old will start performing the chores of a 20-year-old.

RASPY OR SORE THROAT: When throat has a tickle or is raspy, take one tablespoon of honey and sip until gone. Repeat every three hours until throat is without symptoms.

PIMPLES: Three tablespoons of honey and one teaspoon of cinnamon powder paste. Apply this paste on the pimples before sleeping and wash it off the next morning with warm water. When done daily for two weeks, it removes all pimples from the root.

SKIN INFECTIONS:Applying honey and cinnamon powder in equal parts on the affected parts cures eczema, ringworm and all types of skin Infections.

WEIGHT LOSS:Daily in the morning one half hour before breakfast and on an empty stomach, and at night before sleeping, drink honey and cinnamon powder boiled in one cup of water. When taken regularly, it reduces the weight of even the most obese person. Also, drinking this mixture regularly does not allow the fat to accumulate in the body even though the person may eat a high calorie diet.

CANCER: Recent research in Japan and Australia has revealed that advanced cancer of the stomach and bones have been cured successfully. Patients suffering from these kinds of cancer should daily take one tablespoon of honey with one teaspoon of cinnamon powder three times a day for one month.

FATIGUE: Recent studies have shown that the sugar content of honey is more helpful rather than being detrimental to the strength of the body. Senior citizens who take honey and cinnamon powder in equal parts are more alert and flexible. Dr. Milton, who has done research, says that a half tablespoon of honey taken in a glass of water and sprinkled with cinnamon powder, even when the vitality of the body starts to decrease, when taken daily after brushing and in the afternoon at about 3:00 P.M., the vitality of the body increases within a week.

BAD BREATH: People of South America, gargle with one teaspoon of honey and cinnamon powder mixed in hot water first thing in the morning so their breath stays fresh throughout the day.

Remember when we were kids? We had toast with real butter and cinnamon sprinkled on it!
Posted by Unknown at 2:28 PM No comments: 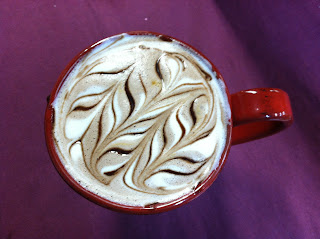 Yummy!  Juan surprised Kay with a mocha from Pachamamas while she was sending about e-mails about the Auburn Art Walk on April 11th from 6 PM to 9 PM.  Pachamamas is across the mall from Juan Pena Studios.

It will be a great show and you are welcome to visit. 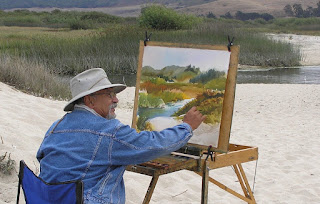 Just a reminder for Juan Peña's students.  If you have any questions about my online classes, please post them here.  I will answer your questions.   You can help your learning by viewing other students questions.

Here is an unsolicited testimonial.

"Saw your series on youtube.com and thought it was great. I have been painting for 5 decades. Mostly oils, but about four years ago I started to get more into watercolor. I have watched a lot of live demonstrations and a lot of taped demos and lessons. Having said that, I now say that your's are great. As soon as I get this sent off I am going to paint my way through your twelve lessons. Then when I have finished I may do it again.
Thank you for putting them online."
Francis 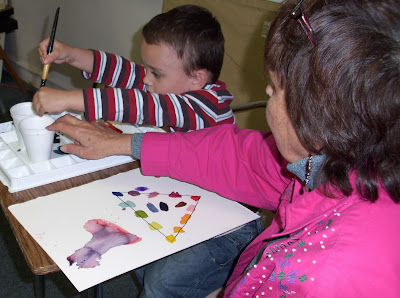 Would you like to encourage your child’s artistic abilities?
Become a part of your child’s adventure by taking a Juan Peña art class with them.

Juan Peña is offering art classes for you and your children.  The classes will convene, after school, from 3:30 PM to 5 PM on Tuesdays and Thursdays.

Class fee is $100 per month for you and one child.  Additional child or parent is an additional $40.  Art supplies must be provided by participants.  Materials list will be supplied upon enrollment.

Posted by Unknown at 2:35 PM No comments: